Some of these cookies are essential, while others help us to improve your experience by providing insights into how the site is being used.

Perth City Hall is set to become a new heritage and arts attraction for the city, designed by international architectural firm Mecanoo. 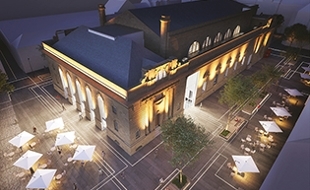 Perth City Hall will be a major new venue, displaying our own museum collections alongside iconic loans from elsewhere and touring exhibitions from the UK and abroad. It will also provide spaces for learning and community events and be a fantastic meeting point at the very heart of Perth. Transforming the building into a modern cultural attraction will allow the Council to deliver on one of the themes of the Smart growth for Perth City for Perth City to grow the visitor economy of Perth.

Planning permission to convert the building has now been granted. While comments are closed, you can still view the documents which were submitted as part of the planning application. Perth City Hall, which will be managed in partnership between Perth and Kinross Council and Culture Perth and Kinross, is supported by £10 million from the UK Government as part of the Tay Cities Region Deal - a £700 million regional investment programme jointly funded by the UK and Scottish governments and regional partners.

The Tay Cities Deal is a partnership between local, Scottish and UK governments and the private, academic and voluntary sectors which seeks to create a smarter and fairer Angus, Dundee, Fife and Perth & Kinross under the headings Inclusive Tay; Innovative Tay, International Tay, Connected Tay and An Empowered Tay.